This year’s CP+ tradeshow in Yokohama, Japan has been cancelled by the event’s organizers, CIPA, due to safety concerns surrounding the growing coronavirus outbreak. According to the just-released press alert, the Camera & Imaging Products Association (CIPA) states that due to the lack of an effective treatment and containment strategy surrounding the virus, they have decided to cancel this year’s tradeshow that was scheduled to run for four days starting on February 27th in Yokohama.

The consumer-oriented expo is an extremely popular event for camera and photo enthusiasts across Asia and the world, and event organizers were expecting around 70,000 attendees. The cancellation of CP+ comes on the heels of another major tradeshow cancellation, the Mobile World Congress in Barcelona, Spain, which was cancelled earlier this week also due to coronavirus-related health risks. 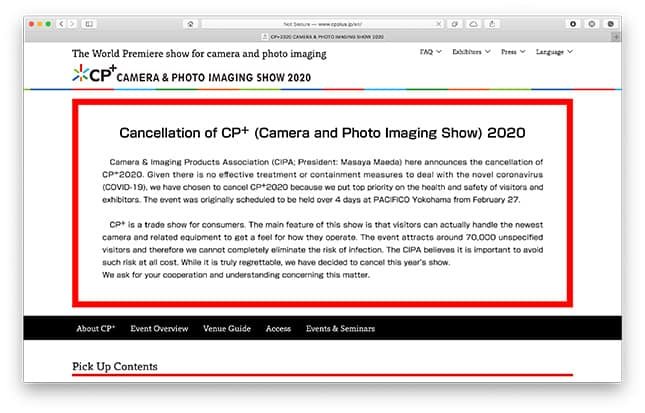